We aim for a new Space (Paradise) Frontier...

It will bring the brand-new Space Transport Business etc.

The detailed information of this Super Power Drive which could produce incomparably more (and more) powerful forces than the electromagnetic force of the EmDrive (that is said it's fast enough to get to the moon in four hours) is as below, from [the way of....].

*As for the space propulsion system theory of the EmDrive etc,

[The Way of the above Space Propulsion System] First, according to the following Fig.1, two (or a more even number's) iron balls (a) with large mass are shot simultaneously from each shooting device (d) of an electromagnetic type etc in vertical directions against any propulsion direction, not to cause backing power as reactions of the above shooters to the utmost.   Secondly, just after the iron ball's passing through each corner curve (on an angle of 45 degrees) in an elastic tube rail of plural ones (b), the spherical shot body in a non-contact state with the main body (c) does cause a completely inelastic collision with the nose (the end) with an electromagnet apparatus of the main (hollow) body.   Thirdly, it may be always repeated (restricken) from the beginning shot many times, recovering the iron balls to the same ball shooters slowly without causing the backing force by utilizing the shooting ball recovery equipments (f) right after cutting power supply for the electromagnet temporarily (for the moment).

An equation of momentum conservation in the perfectly inelastic collision between the main body and the spherical body after passing through the curve is...

v1 : The same ball’s velocity (after its passing through the tube rail’s curve) 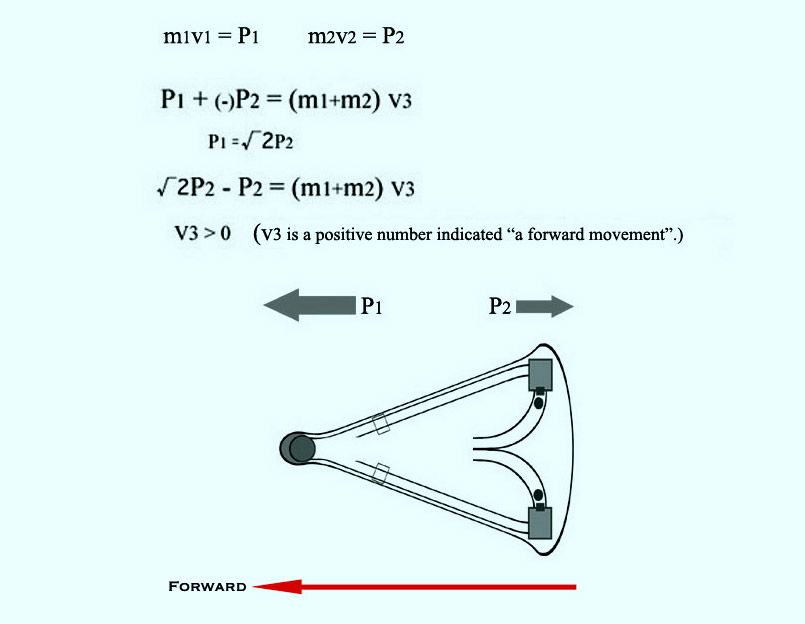 [The Experimental Method (on the ground)]

This ground experiment purpose is to examine (research) whether the main body (A) moves (works) surely (really) when the completely inelastic collision occurs between the same body (A) & the spherical body (B) as shown in each simple design (Fig.3) of the below,

and then, the following accurate (computable) distance (x) that the united body moved actually from the first position of the same body to its last position could be calculated from the value of v3 (m/s).

*In case of the ground experiment with the temporary equipment module, a (little) backward force would have been exerted on the main body (A).

Because the spherical body (B) always comes into contact with the above body (A) up to the collision between the iron ball(s) & the neodymium magnet board, however, in case of the space flight with this spacecraft propulsion module, the A body & the B body are in a non-contact state after each iron ball's passing through the tube's curve... [The Experiment Data] “Proof (example) is better than argument (precept).” First of all, please see scientific experiments in the following movie files (DS1.AVI & DS2.AVI & DS7.AVI) fairly by the third party, not by intention of the inventor (the author).     Note : Each main body in the DS1 and/or DS2 which weight is more than 150g could move slightly but surely. Of course, it moved without hitting on a rear block etc. As a proof, please see the ground experiments in the following video file : DS7 that replaced the shooting power with gravity (G force) even with no blocks...     ***The movement has never been done by a frictional force from a ground surface, because of no power unit (for transmission gear) to directly turn wheels of a cart used for dynamic experiments. As for the experimental results, it’s been all the same as the above movement in (re)testing many times. Indeed, it could have been shown by means of evidence that thrust force of the spacecraft propulsion engine system is incomparably larger than thrust one of ion engines which can move only a thing (1g) on the ground. And then, the same body would stop straightaway by that friction on the ground, however, it could certainly show uniform motion!! in the universe.

Moreover, it will be able to approximate to a dream-like superspeed (semi-light speed) by reusing repetitively some inducing substance (the iron ball...) which is not disposable just like rocket fuels.

If someone is still doubtful as to the above experimental results

just like a magic trick that can deceive one's eyes....,

shall anyone try a thought experiment

without using these experiment tools with the express purpose?

In the first place, imagine that an iron ball (A) which is large (about 7kg and over) in mass

like a shot of athletics and a neodymium magnet ball (B) which its mass is small (about 0.005kg) are floating in a (universe) gravity-free space.

What will become of the corporate body at all?

Of course, the above united body does uniform motion, not at rest

in the direction of the left side from the right side.

This space propulsion system has applied that motion no doubt!!

The point is to take advantage of pressure difference effectively

at the perfectly inelastic collision and then, it is possible to move forward so smartly....

*As for examples of performance of the Super Power Driving equipment,